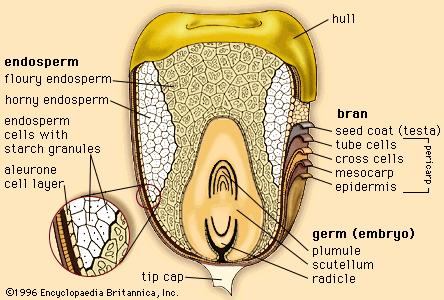 The kernel ovule has been pollinated and is beginning to grow by cell division. The kernel contains an embryo (tiny immature plant that will germinate once planted) and an endosperm that will provide the energy needed for the seed to germinate and emerge from the soil.

The kernels are now well into a period of rapid starch accumulation which results from sugars made from photosynthesis in the leaves being shipped down to the kernel where they are converted into starch. Cell division within the kernel (endosperm) is mostly complete (the embryo or immature corn plant is still growing). Growth of the kernel at this point is mostly due to cell expansion and filling of the cells with starch. The purpose of starch in the endosperm is to provide an energy source for the germinating seedling, however, it also makes a good source of starch for many other purposes.

Final yield depends on number of kernels that develop AND the final size and weight of the kernel.

The husks and many leaves on the plant are no longer green at this stage. The average kernel moisture content at R6 is 30-35%, however this varies considerably between hybrids and environmental conditions. The grain is not yet ready for safe storage, which requires 13-15% moisture level for shelled corn.

Most farmers choose to let the crop dry down partially in the field, and the rate of field drying depends on the hybrid and environment.