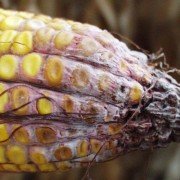 Gibberella Ear Rot, or Red Ear Rot, is caused by the fungus, Gibberella zeae (Fusarium graminearum). This disease can occur throughout the U.S. Mid-West and Southern Ontario. The pathogen overwinters on corn, wheat and barley debris. Spores produced on the debris lead to infection during silking. Red Ear Rot is more prevalent when cool, wet weather occurs during the first 21 days after silking. Extended periods of rain in the fall, which delay dry down, increase the severity of the disease. Red Ear Rot will be most severe in fields where corn follows corn, or corn follows wheat that was affected by Fusarium head blight (scab), which is caused by the same pathogen. END_OF_DOCUMENT_TOKEN_TO_BE_REPLACED