As much as warmer weather may have growers in Ontario thinking of spring planting, a provincial ag specialist warns farmers to consider the old crop ahead of any plans for the new crop.

Temperatures are moderating and in southern Ontario, they’ve risen well above freezing for the first time in nearly two months. 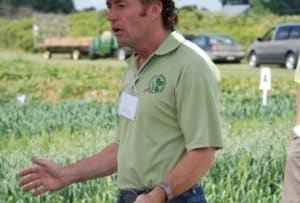 That’s prompted an alert from Peter Johnson, cereals specialist for the Ontario Ministry of Agriculture, Food and Rural Affairs (OMAFRA), strongly suggesting growers check their bins for snow and ice caps sitting atop the grain.

“They need to check the top of the grain mass for snow accumulation,” Johnson said at the London Farm Show last week. “It looks right now that it’s pretty easy to pull out because it’s solidified and frozen in there.

“But if it warms up, and that snow melts, you have water going into the grain mass and in a concentrated zone you can get the grain off quality very quickly.”

Thus Johnson urges growers to check now, even in cases where they believe their bins are virtually airtight.

“You can’t just rely on the heat sensors,” he said. “This is one of those things where the only way to do it is to get up there and look, and now is the time.”

Given the winds and amount of snow, it’s possible that drifting inside the bin has occurred, Johnson said at the Middlesex County Soil and Crop Improvement Association’s show exhibit.

Growers checking their bins at the top need to mind proper safety measures, he added. “Make sure you have a harness on, that there’s somebody outside and that you lock out the auger — all of those kinds of things — because grain safety is huge. But it’s the time of year you need to get that job done.”

Johnson, after 30 years of service with OMAFRA, is preparing to step down from his official duties on March 19.

— Ralph Pearce is a field editor for Country Guide at St. Marys, Ont.

Safety: never too busy for safety