OMAFRA field crop staff with the assistance from members of the Ontario Agri-Business Association (OABA) have completed the annual Provincial corn ear mould and mycotoxin survey. These mycotoxins, particularly vomitoxin (DON) produced primarily by Gibberella/Fusarium ear moulds can be disruptive when fed to livestock, especially hogs. The purpose of the annual survey is to assess grower and industry risk. Eighty-six percent of the samples tested low (<2.00 ppm) which bodes well for the 2017 Ontario corn crop.

From October 7th to 19th, a total of 179 corn ear samples were collected from across the province and rated for visible ear mould infection. Five consecutive ears were pulled from four random locations throughout a field. After recording pictures to document the presence of moulds, insect, bird feeding damage, etc, samples were placed into driers as soon as possible after collection. Dry ears were shelled and mixed through a sample splitter and delivered to SGS Agri-Food Laboratories in Guelph for vomitoxin (DON) analysis.

Of the 179 samples collected:

While visual mould symptoms were apparent in some samples, they were much less pronounced than the 2016 survey, and more in line with what is observed most years. Vomitoxin analysis revealed DON concentrations lower than 2016, although incidences of elevated DON concentrations were still slightly higher than the long term average (Table 1). The vast majority of the samples (86%) tested below 2 ppm but as we state every year, growers need to be vigilant and assess each of the fields for the presence of disease, insect feeding, hybrid performance, etc.  It is important to note that 5 of the 25 fields which had DON levels >2ppm were included in the survey because the growers had observed ear rots and were concerned. If these 5 fields are removed, the results would change slightly ( 71% (<0.5ppm), 17% (0.50 to <2.00 ppm) and 12% (≥2.00 ppm). A map showing the distribution of samples and their corresponding DON levels is presented in Figure 1. 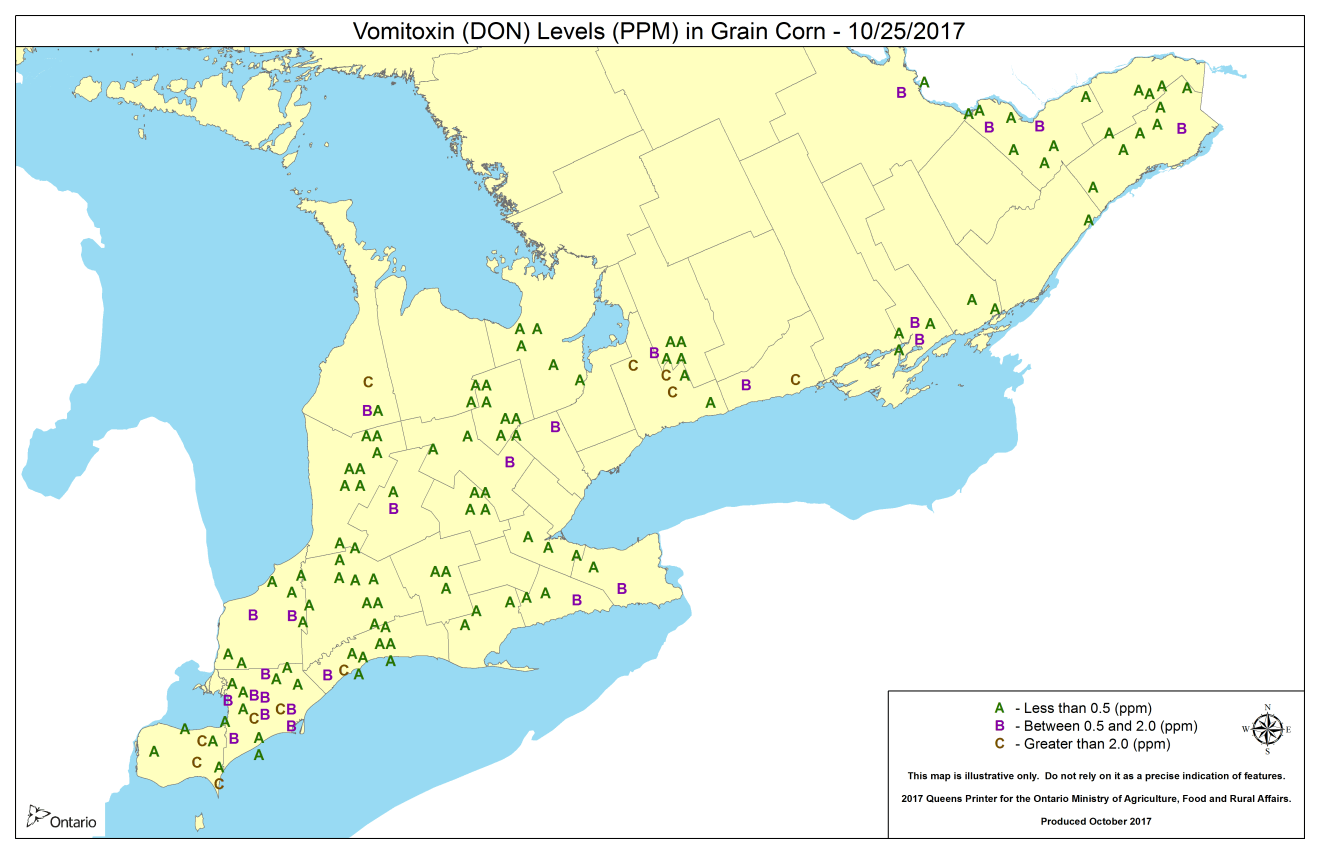 Ear feeding by pests, particularly Western Bean Cutworm (WBC), and in a few cases, birds, presented an opportunity for greater mould infestation in some samples. In other samples with light WBC feeding, mould and vomitoxin appeared relatively low to non-existent, suggesting that while ear damage may predispose risk, increased mould or vomitoxin levels were not a certainty. Visual mould and elevated vomitoxin levels were also observed in samples with little or no feeding injury. WBC damage also seemed more apparent in areas which may not have traditionally received high WBC pressure, such as central Ontario. Growers in these areas may need to start monitoring WBC in the future.

This survey does not fully capture all regions of the province, and results can vary locally from field to field depending on hybrid, planting date, insect feeding or fungicide practices. These results may not fully capture what is occurring in your fields, and therefore monitoring is recommended. Timely harvest is important. Leaving diseased grain in the field allows the ear rot fungi to keep growing, which will increase the risk of mouldy grain and mycotoxin contamination.

If a field contains a significant level of ear mould, collect a representative sample prior to harvest and have it tested for mycotoxins before storing the grain or feeding it to livestock. If necessary segregate the harvested grain from your other corn. A lab test is often the only reliable way to definitively determine mycotoxin presence and levels.

When ear rots are present, the following harvest, storage and feeding precautions are advisable (Adapted from OMAFRA Pub 811, Agronomy Guide for Field Crops):

Preventing ear rots and mould can be difficult since weather conditions are critical to disease development, so a few things to consider for 2018. Hybrid selection is important but remember although some tolerant hybrids are available, none have complete resistance. Crop rotation can reduce the incidence of ear rots, while several foliar fungicides aimed at suppressing ear rots have also been registered. Cultural practices such as tillage have been shown to have limited success in preventing ear and kernel rots.

We would like to thank the Grain Farmers of Ontario and SGS Agri-Food Laboratories in Guelph for their support of this survey and analysis as well as the Ontario Agri Business Association (OABA) and its members for their interest, support and participation. Sincere thanks to all of those who helped assist in the co-ordination and collection of samples: Agris Co-operative, Benjamins Agronomy Services, MacEwen Agricentre, Maizex Seeds, Parrish and Heimbecker, P.T. Sullivan Agro Inc., Sprucedale Agromart, TCO Agromart, as well as the several other corn producers and OMAFRA field crop staff who were involved.