Fusarium Head Blight is a fungal disease that affects the head of small grain crops. Also referred to as Scab, it can affect wheat, barley, oats, rye, corn, and triticale. Wheat and barley are generally the most affected. It is mainly caused by the species Fusarium graminearum, and can cause loss of quality and yield.

Fusarium head blight bleaches all or part of the head. Typically, the stem remains green. 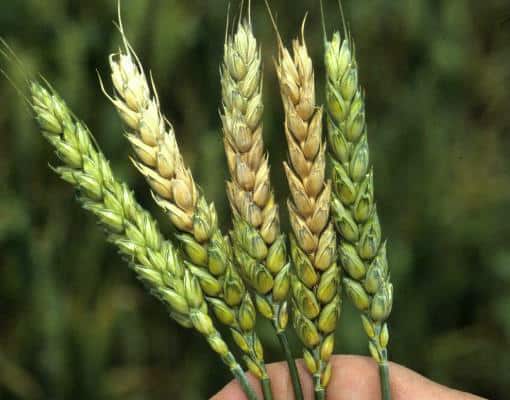 Why is it a concern?

Kernels of infected grain (also referred as tombstone kernels) are lightweight and shrunken. These kernels can be loss during combining or seed cleaning and result in a lower overall yield. If the amount of infected kernels are high, grade losses can also occur at the elevator.

There is a very low tolerance for infect grain in food and animal feed. This is to protect against harmful toxins produced by the fungus call mycotoxins. DON (deoxynivalenol) is the most common toxin found. It can cause reduced feed intake in livestock, reduce the baking quality of wheat, and malting and brewing qualities of barley. The disease can also affect the germination rate and seedling vigor if the grain is planted again. 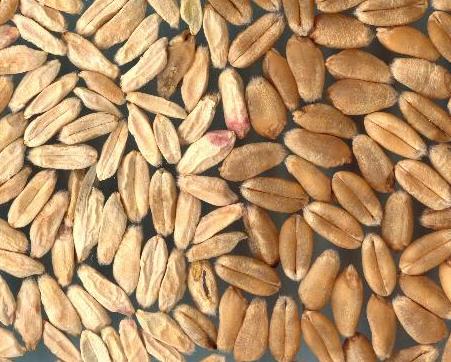 The fungus overwinters on infected kernels, chaff, and stubble or straw/stalk residue left on the soil surface. Extended periods of warm (22-27˚C), wet, humid weather substantially favor infection. The infection occurs during flowering. The longer it stays wet during flowering, the greater the chance of infection. If the weather continues, the pathogen can produce spores on the infect grain and become another source of infection.

Symptoms appear shortly after flowering. Disease spikelets appear bleached on all or part of the head. During favourable weather the fungus produces salmon-orange to pink spores at the base of the kernel. These spores will infect adjacent kernels. The infect kernels are shrunken, wrinkled and light in weight. They have a rough scabby appearance and can range in color from light-brown to pink to greyish-white.

During favourable weather the fungus produces salmon-orange to pink spores at the base of the kernel. 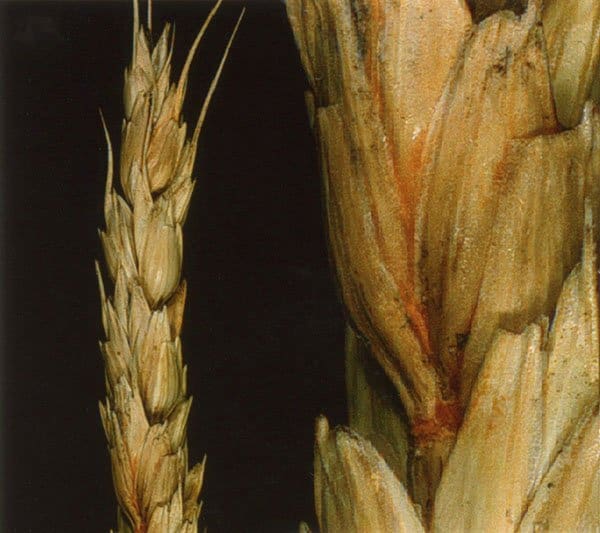 During favourable weather the fungus produces salmon-orange to pink spores at the base of the kernel.

Symptoms of Fusarium head blight–notice the bleached spikelets within the green head. 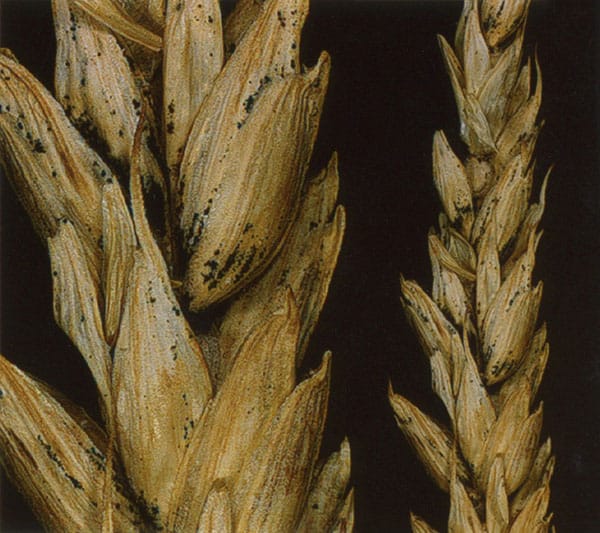 Symptoms of Fusarium head blight–notice the bleached spikelets within the green head. 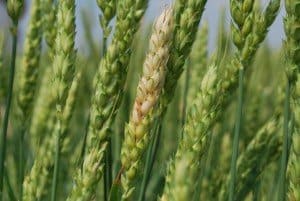 Control at the combine and in the bin

Fungicides are most effective when applied preventively. They must be applied prior to infection and are designed to reduce the risk during pollination of the grain head. There are many products available that can work effectively at reducing disease risk and the resulting mycotoxins.

Prosaro by Bayer or Caramba by BASF.

Contact your local Thompsons branch for more information about rates and pricing.

When spraying preventative fungicides, timing is very important. Spraying too early or too late and it will not be very effective.

The window for application begins when 75% of heads have cleared the ligule of the flag leaf (~Z59) to 50% of the heads beginning flower (Z60). Optimum timing is 1 to 2 days after you reach Z59. Range of application is generally 0 to 5 days after. The intention is to get as many head treated as flowers begin to open.

The speed of head emergence is very dependent on temperatures. The warmer it is the faster you will move through the optimum window. When it is very warm it might only take a day to go from 75% head out to 50% of heads beginning flower. 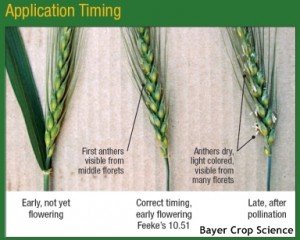 To ensure through coverage of the heads follow these tip when setting up your sprayer: 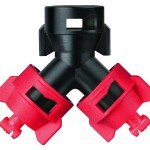 A Field Guide to Cereal Staging (OMAF, U of G and Bayer CropScience)