Now that your crops are in the bin, it’s important to learn how to keep them conditioned and stored properly.
Throughout the winter months it’s important to monitor your soybean temperature, and to aerate your bins.
If you haven’t sold any beans then coring out your bin can be an option to remove some fines, and help stir the grain a bit.
It is important to make sure that soybeans are stored at a 14% moisture or lower. Don’t assume that because your beans went into the bin really dry, you don’t have to aerate. Those low moisture beans are still hot and need to have the field heat removed.

When should you run the fan?

Air temperature and relative humidity levels are the two most important things you need to focus on when dealing with your fanning operation. It is important to check both of these things constantly throughout the day so you know how long to run the fan.

In order to have effective drying the outside air has to be drier than the inside air. The fan operation is limited to temperature and relative humidity levels. On some days, drying can be accomplished from 9 AM until midnight, while on others it may only be from 9 AM to 6 PM or sometimes even shorter. Times will change depending on size of bin, amount of grain, etc.

It is important to remember that the beans at the top of the bin will usually be the last to dry, and sometimes can have the highest moisture levels from drying, or if you have been aerating in the past. 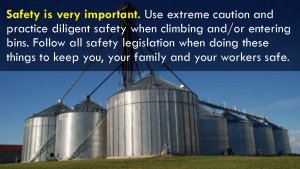 Once desired grain temperature has been reached, temperature should remain fairly stable in the grain mass because grain is an excellent insulator as long as there are no air movements through the grain mass. Thus, after each aeration cycle is complete, the aeration fan should be blocked off to prevent unwanted air flows. 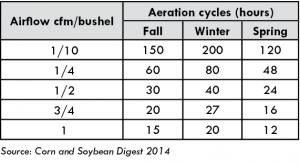 Are there any websites that can help me know when to turn on my fans?

BINcast helps by providing you with the predicted equilibrium moisture content (EMC) for your bin for the next 5 days. This will help you know when to turn your fan on.

It’s important for a grower to constantly monitor their bins throughout the winter. If you have any questions please contact your local Thompsons Agricultural Consultant or branch. We’re here to help. 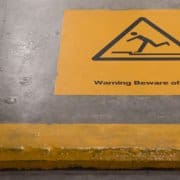 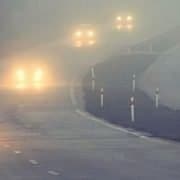 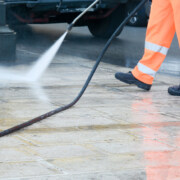 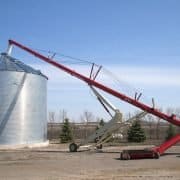 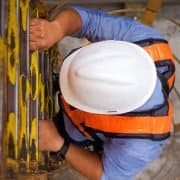 Safety: never too busy for safety